Kevin Westenberg has photographed hundreds of rock and pop stars including Sting, Mary J. Blige, The Rolling Stones, U2, Nirvana, Soundgarden, Coldplay, Radiohead, The White Stripes, and Pink Floyd’s David Gilmour for album and magazine covers. Two years ago he set down his camera and literally went back to the drawing board.

The world-famous photographer, whose subjects also include theater and film luminaries such as Tom Stoppard, Alan Rickman, and Frances McDormand, returned to his first love of architecture and set about remodeling his home on Lake Washington.

Westenberg lent his photographic talents to documenting his remodeling project. In this story, we print the “Before” images, which were taken during the renovation work. Next month, Seattle Arts & Architecture will run a second story with the “After” photos showing the completed job.
For more images by Kevin Westenberg visit his Instagram page

While his photographs of music icons have graced the covers of international music publications and countless releases – he has more than 280 album covers to his credit on AllMusic.com – his architecture skills had shifted from the hands-on work required to earn an architecture degree from Washington State University in 1983, to experiencing architectural masterpieces in person.

A long, rolling green lawn connects a beautiful, white-with-black-trim clapboard house to this charming boathouse resting on a huge expanse of Lake Washington. Experience waking up to an easterly view of truly magnificent sunrises.

“One of the things I got the most out of in architecture school was learning about the history,” Westenberg recently told Seattle Arts & Architecture, “and in the 30 years since I got my degree I’ve been able to see the historical architectural works I learned about at WSU in real life. I’ve seen Renaissance architecture in Europe as well as great modern architecture happening now, like that of Zaha Mohammad Hadid, who worked a lot with curves and computers.

“Coming back I feel much more attached to how real design works and what people respond to when you walk into a space,” he added.

The space he has been working on is his three-bedroom home of 11 years. It includes a downstairs apartment, and sits on property with a 120-foot apron down to a 40-foot-wide waterfront with a dock and boathouse. Inside the boathouse is a small hydraulic boat lift he believes can be altered for a slightly larger boat.

“The house was built in the late 1940s and is proper old-school construction,” he said. “I know that because I’ve touched in some way most every wall and the builders said the wood in those walls doesn’t exist anymore.”

Jesus poses rockstar-style for Kevin. The room? The kitchen!

In addition, landscape designer Dan Blossom, who was recently profiled on SA&A, has completely reimagined the grounds.

FROM ARCHITECTURE TO ALBUM COVERS

During Westenberg’s fourth year of Architectural school he, along with six of his classmates, had the opportunity to study abroad in Copenhagen’s DIS architectural program. This proved to be the turning point of his life and opened all the doors of possibility. After he returned and finishing the fifth year to graduate from the WSU architecture program, Westenberg moved to London. It was there that he began working for Richard Branson at the Virgin Megastore, which Branson owned at the time.

That helped him hook up with music business people. A natural gift for communicating with musicians, combined with his photographic skills, gave him a unique ability to capture them both honestly and artistically on film. He began earning assignments in the UK and eventually the U.S. In 1986-87, he lived in Vancouver and worked for Nettwerk Records.

“The first of their bands I photographed extensively was the Grapes of Wrath and Skinny Puppy,” he recalled. “Then I did work with Sarah McLachlan and a lot of industrial bands from the ’80s like Chris and Cosey and Front 242. This was when Depeche Mode was just starting. Finally I went back to London, got dual citizenship, and have been splitting my time between the two countries ever since.”

Photo of Kevin’s house (second from the right), during Seafair, 1954. Notice the epic number of people watching the hydroplane races from the bridge. Or, the guy walking through bridge traffic! As Kevin notes: “…and then, this hydroplane race guy, strapped into a cockpit of a WOOD BOAT with a giant aircraft engine in FRONT of him, spewing oil all over him, will drive at 200MPH! On the water! But, first, he’s going to drive through the bridge, turn around, and come back under at over 160 MPH to make a spectacular flying start. The glory days!”

In 1992 he started getting bigger jobs, beginning with project photography for Ten Summoner’s Tales, the 1993 release by Sting, his “first worldwide megastar.” That launched him into view of “a lot of up-and-coming people in London,” one of whom was Mary J. Blige. He photographed her for the album and publicity surrounding the release Share My World, “which was her kind of breakout album,” he said.

“So I got two global superstars from two different musical worlds at the same time. I didn’t really realize back then that it was going to make such a difference, but from that point I was flying,” Westenberg said. “And I was flying for 15 years after that, just constantly all over the world.”

The spectacular backyard view deck has been completely revamped and the overhang, removed.

One of those international locales was hometown Seattle, which had become the center of the contemporary musical universe thanks to the emergence of “grunge.”

“I ended up working with Soundgarden for ten years and then I did the occasional thing with Pearl Jam and Nirvana and that was ironic to me that I ended up being well known in Seattle by profiling Seattle people on assignment from London magazines.” 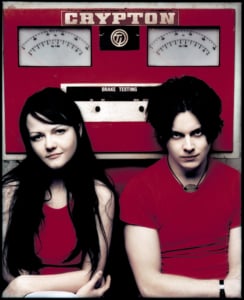 In 2001 he photographed the White Stripes’ Meg and Jack White for the cover of Mojo Magazine (pictured), "their first major UK magazine cover story."

The duo’s third recording, White Blood Cells, was part of their emergence as an international phenomenon and, recalled Westenberg, "Of course, their feeling was we have to get this 100% right."

It was shot in London, in an old car garage in Camden, and was so right that when the Brooklyn Museum curated its landmark "Who Shot Rock & Roll: A Photographic History, 1955 to the Present" in 2009, it was included to represent Westenberg’s massive body of historic work.

The next 20 years were an odyssey of flying between the U.S., Europe, and Iceland as well as Japan, where he worked with that country’s biggest bands.

“It was hard work and the stress and pressure almost killed me a few times. But not a lot of people get that kind of shot,” he said. “I wouldn’t have traded it.”

Teyo and company are removing the vinyl siding, and replacing it with cedar wood…

A gorgeous photo of siding being replaced and painted white.

The house went from light, light blue, to black, to white, which is the best, most fitting color of all.

SHUTTING THE SHUTTER FOR GOOD

Part of Westenberg’s motivation for exiting the photography world in 2015 and coming back to plant his feet on the solid ground of renovating his own home, was “a complete shift in music, photography and media that had started around 2000.”

“The digital camera really made photography and photo delivery so accessible that it seemed everybody could do it and that started a slow decline in quality along with increased leverage by record labels and magazines to expect free work,” he explained. “I was recently offered something and I might as well have given them money so my work could be used to publicize their group. There’s no way to make money doing that unless you want to do a crappy job and nobody wants that. Not when you’ve set a standard.”

The David Gilmour project, for his album Rattle That Lock, was one of two international campaigns he did in 2015 before stepping away.

“I worked on that quite extensively,” he said, “and also with the Irish group the Corrs. But after the release of the Gilmour album, and he’s as famous as they get in the music business, where I would have had 15 calls offering work in the past, I received no calls.”

Another challenge for serious photographers has been the “viral” effects of photo services like Getty. Westenberg worked directly with Getty when it was new, in 2000, but soon ended that relationship. Seven years later, the service would effectively nullify his contract as official photographer for the Led Zeppelin “Celebration” reunion.

“Getty stepped in at the last minute, took all the rights, probably paid Zeppelin hundreds of millions, and just snapped up everything,” he said. “I never saw a penny. That’s kind of how it goes with them.”

This is the black iteration the house took … now removed and painted a soft white, with black trim. Extraordinary transformation. With the remodel, the front of the house has a modern feel to it, yet maintains a warm, traditional vibe to the place.

Westenberg’s retirement, however, does not mean he is walking away entirely. He has now finished the Lake Washington home remodel and will soon return to his 200-year-old home in London, where a documentary of his life’s work and experience is currently being produced. He is also busy putting together a book of his photography.

“I’m working on some limited edition print projects with a big lab in the U.K.,” he said. “We’re creating a series of old-school prints that I’m going to sell online. I still try to innovate, and I am now moving back to a more classic style of photography. So I’m reinventing all the old work that was innovative and a departure from the classic style, so it looks like it’s been there forever.”

That may well describe what he has done with his lakefront home. Informed by historic influences that mix with modern lines, it somehow feels like it’s been here forever and has always been right.

THE ‘BEFORE’ GALLERY CONTINUES …

This is a view of the living room, from the kitchen.

Hand-crafted tiles being installed in the kitchen with an artisan’s touch.

The kitchen sheathed in plastic.

So, THIS is what a heated floor looks like underneath- art!

The kitchen starts to take shape.

This new window is roughly twice the size of the original window. Let there be LIGHT.

The guys working on the floor.

Kevin catches a worker seemingly taking a nap in the chimney.

Luis sanding the floor. That front door is now “oversized”, and commanding from the front stoop.

The floors turned out beautifully next to the concrete, hand-crafted fireplace.

Exterior siding being painted in an upstairs bedroom.

A bedroom prepped to be painted white. The interior of the house is all white.

The entire front yard was thoughtfully landscaped, the design by the very talented Dan Blossom. Dan is a musician, and Kevin and Dan know each other from the music world.

The dark side. It’s always there. In this case, in the garage as a new door is being installed.