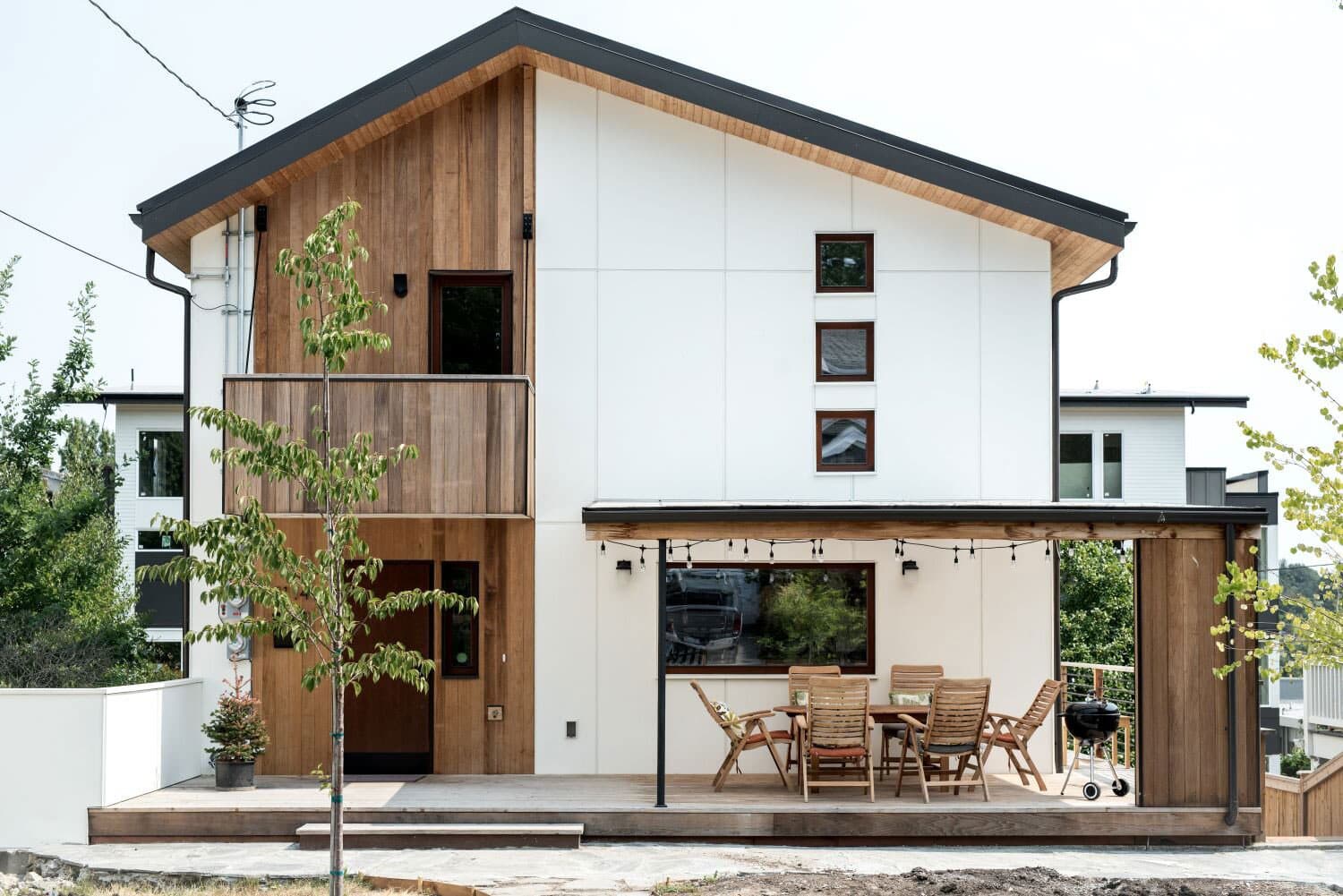 A DREAM HOME
OF EXTREME GREEN 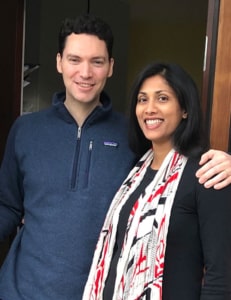 Another reward will be in 2025, when it’s estimated that the cost of installing their solar energy system will have been recouped in utility bill savings and incentives. In the meantime, thanks to their rainwater harvesting system, Seattle’s notorious rainy days are regularly putting smiles on their faces.

For the first half-dozen years after they moved to Seattle, the couple had lived in a series of apartments. But those changes of address paled beside the changes in their lives. They both transitioned from the corporate world to nonprofit work. Andri now works in finance at the Gates Foundation and Veena started a social enterprise helping immigrants translate passion for their native cooking into marketable skills as either an employee in an existing restaurant or by launching their own startup.

Then their twins were born.

What never changed was a shared belief that homes needed to play their part in curbing global warming. A next generation’s arrival in their apartment only solidified their commitment to build the most sustainable home possible.

“We wanted to make sure the house was our house, and reflected our values of sustainability, innovation and affordability,” Veena told The Seattle Times.

Clearly overachievers, they began planning a home that met the most demanding green building criteria. Built Green, a nonprofit residential building program of the Master Builders Association of King and Snohomish Counties, had what they were looking for.

“The Built Green certification program has different levels with a top rank of five stars,” Andri told Seattle Arts & Architecture. “Then there is a higher level called Emerald Star, which would be comparable to six or seven stars! It has a comprehensive checklist for energy use, material use, water management and a few other things.”

So demanding is the Emerald Star level that only one home in Seattle – and a couple of projects outside the city – had received it.

“We went for the Emerald Star,” Andri said cheerfully. 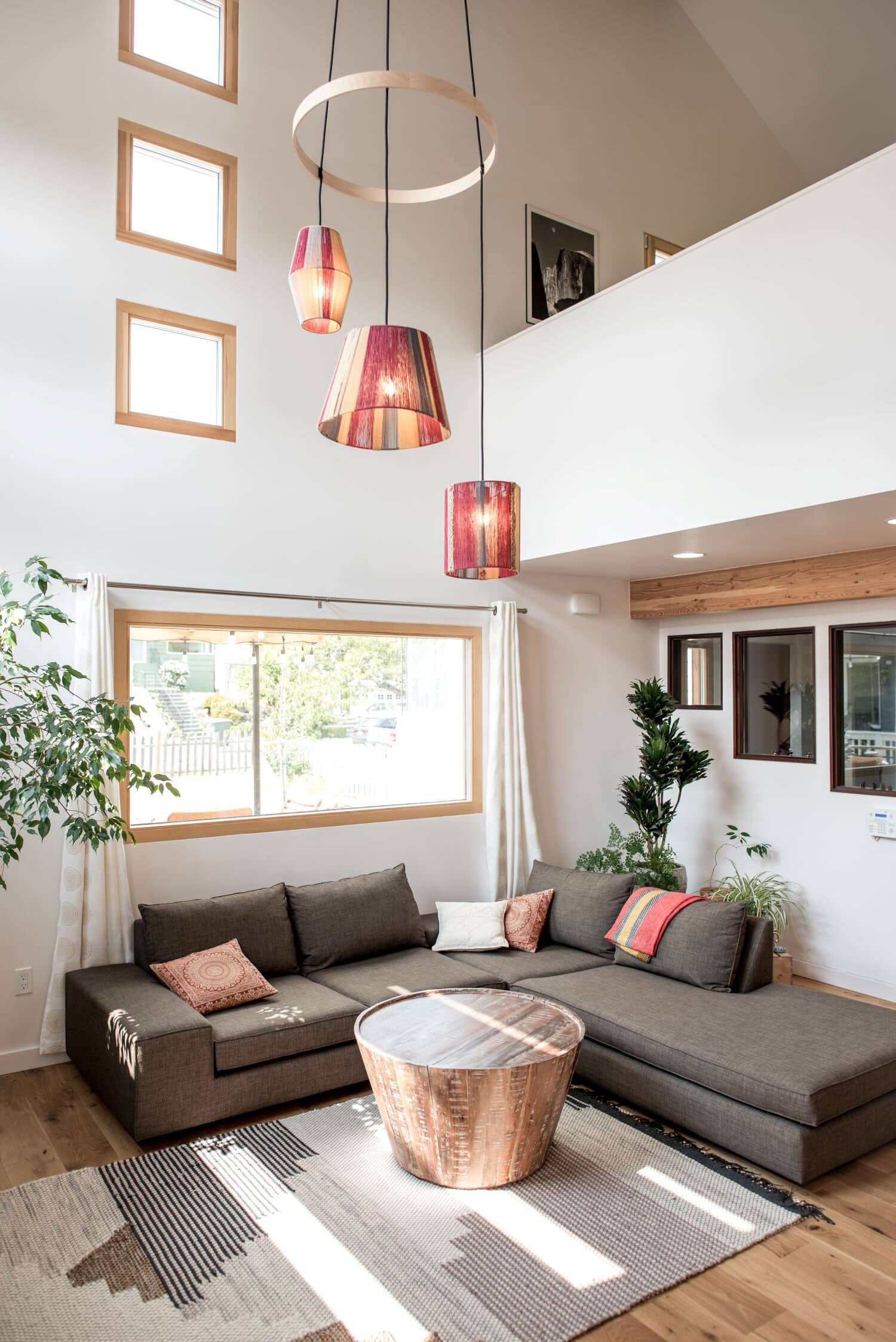 The living room above, and the kitchen below 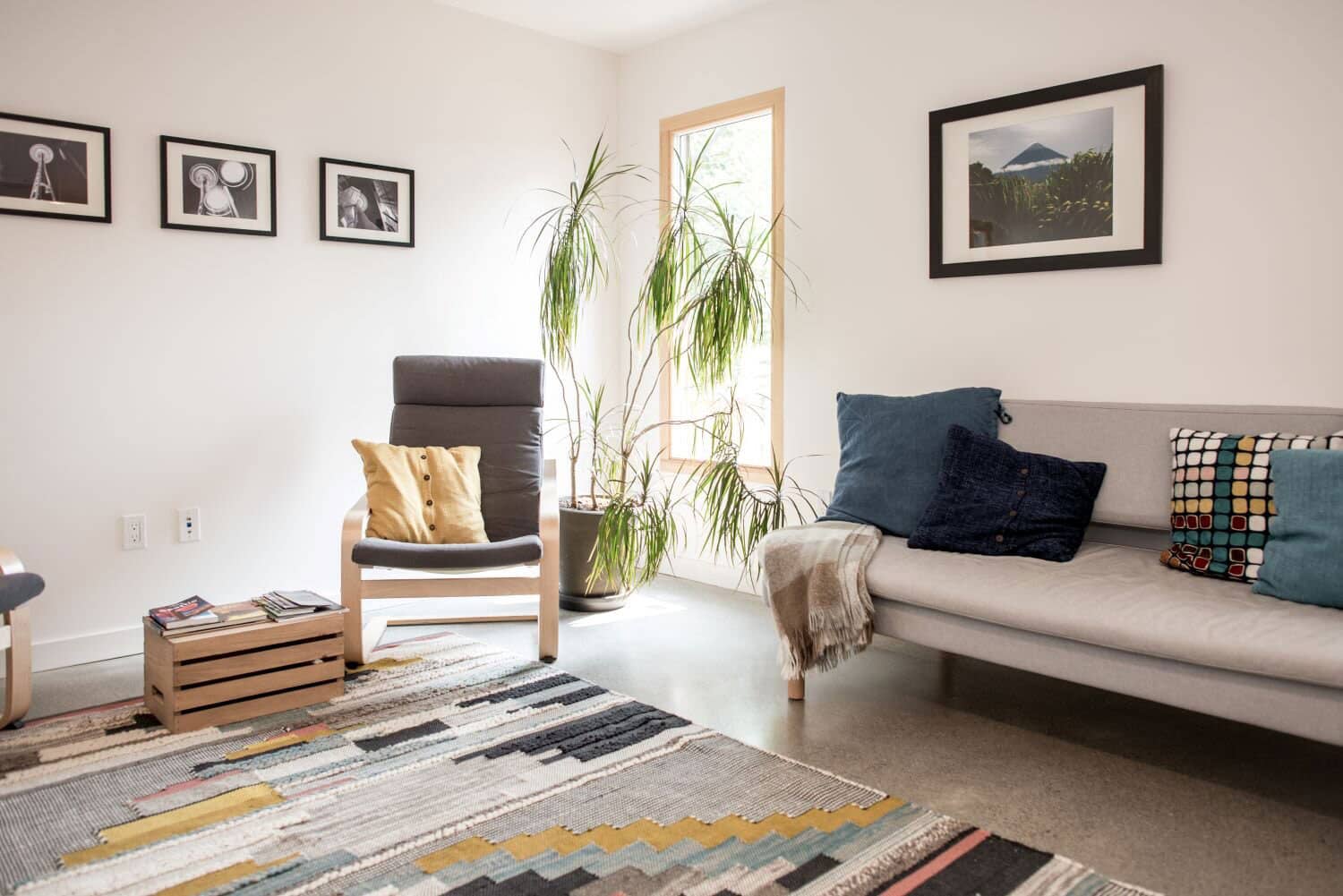 THE ROAD TO THE EMERALD STAR

Andri and Veena chose net-zero specialists TC Legend Homes as the builder and were very involved in the design of the home. Shared values around sustainability and affordability were the basis for a successful partnership. As scrupulous in their research as they were committed to their principles, they checked out the companies behind each sustainable material and system of interest. They were aiming to select only sustainable, non-toxic building materials that minimized the pollution and global warming they were fighting.

"The first builder we wanted to work with let us know in no uncertain terms that their work would be beyond our budget," said Veena. "The second builder was slightly more affordable but their design didn’t meet our needs and their initial estimate was 50 percent over our budget. We kept looking though and were lucky to find TC Legend Homes whose stated mission is to make positive-energy and net-zero energy (homes) affordable. By pushing the envelope within our budget, Andri and I were able to build the house of our dreams."

They soon felt a bit like pioneers in this new green world. While experienced homebuilders like TC Legend were familiar with the materials needed, FSC wood was hard to source. This is wood, certified by the Forest Stewardship Council, that carries a “green house-building seal,” like the “organic” label for food.

“It’s not as prevalent and so it’s harder to source,” Andri said. “But it includes a verified paper trail to prove it’s from sustainable sources. Demand is still low, and so FSC-certified wood suppliers are few and the prices can be high. But we found Green Home Solutions, a shop in Seattle that could provide most of the wood we needed. The doors and a few other components had to be sourced elsewhere.”

After doing their research and preliminary design concept with TC Legend Homes, they met with Ecoe Company, a Built Green verifier, to ensure they were on track for the high Emerald Star rating. Equally important, the Built Green organization provided rapid feedback when the project ran into complex issues with meeting requirements. 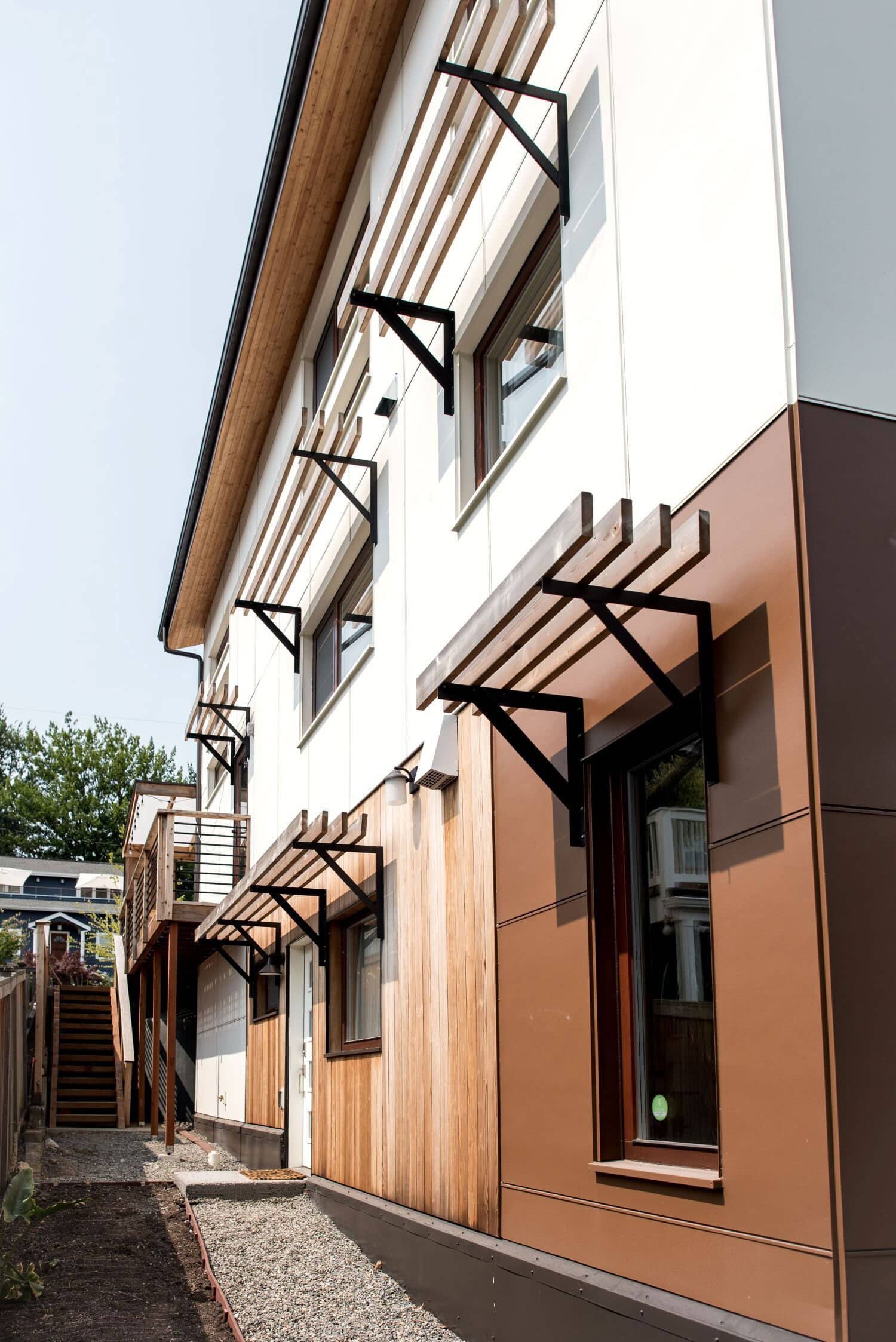 In addition to the FSC-certified wood they used airtight Structural Insulated Panels (SIPs), which TC Legend Homes has used in many projects. SIPs are like prefabricated particleboard panels with insulation in between. Six-inch thick panels were used for the walls and 10-inch thick panels created their roof. Their windows, all triple-paned, are highly efficient and sized to take advantage of “passive solar” by being large when facing south and smaller facing west. “Passive solar” design also includes a system of awnings on the south side of the house that prevent the summer sun from overheating the house, whereas low-angle winter sun is allowed to help heat the house for free.

The insulation, passive solar design, LED lighting, Energy Star appliances, and other features incorporated keep energy use sufficiently low, such that the solar photovoltaic system on the roof is able to offset the home’s energy use, resulting in a net-positive energy balance: over the course of a year, the house produces more energy than it needs.

“It was ‘net positive’ before we got an electric car,” Veena smiled. “The Tesla takes a lot of power. But I’m now driving less, and we’re hoping to get ahead again.” 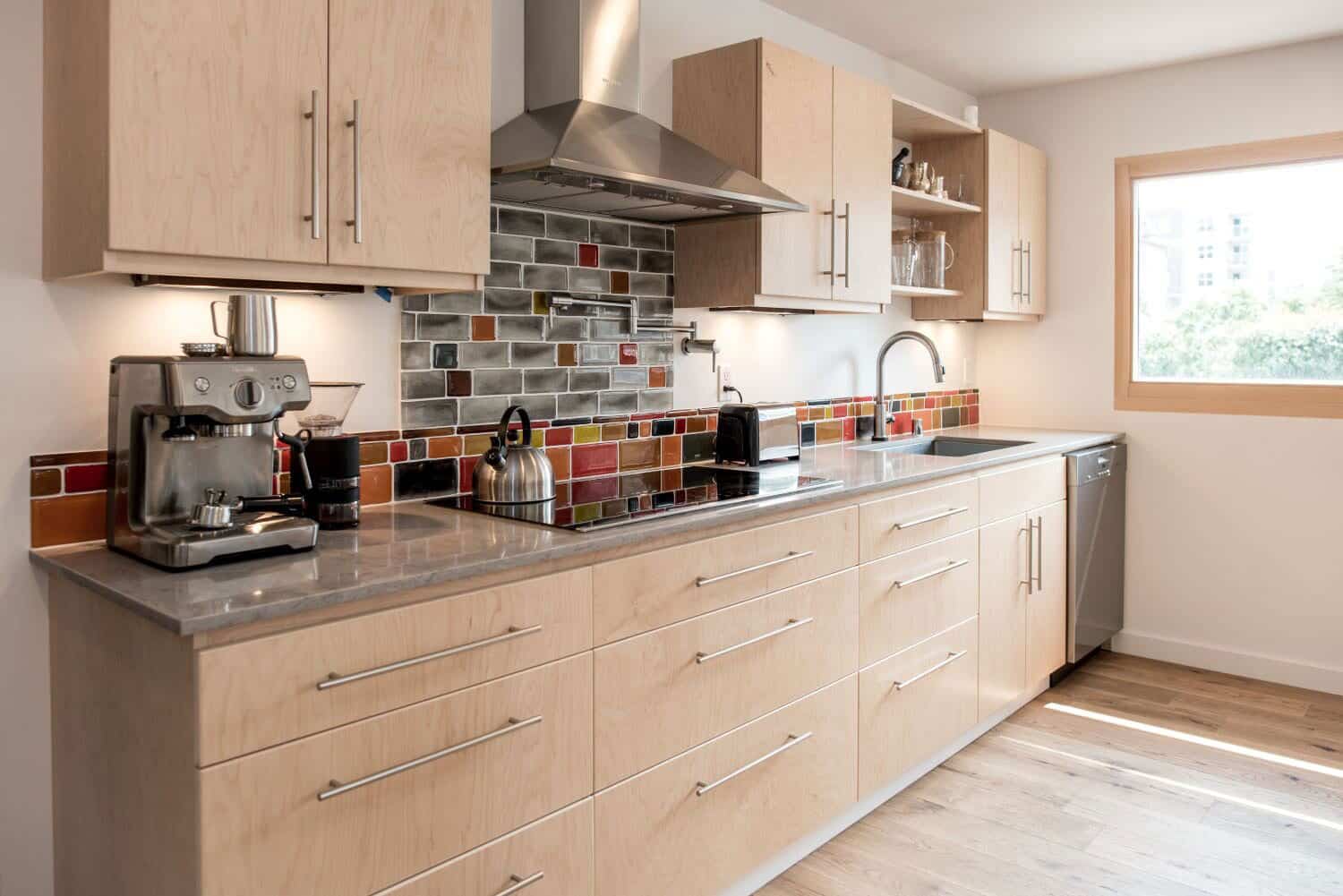 THE HARVESTING OF WATER

The savings of energy and elimination of toxic materials (see “Specs” section below) was complemented by a rainwater system that, as it turned out, had benefits they hadn’t imagined. With 10,000 gallons of storage it was capacious and advanced enough to meet stringent storm run off regulations introduced shortly before construction got underway.

“I think the city’s doing the right thing,” Andri admitted. “They believe everything built should mitigate its own storm water so there’s no run off and the sewer system doesn’t get overloaded in a big storm where you have to dump polluted runoff and sewage into Puget Sound.”

However, he added, even the easiest solutions offered in the 100-page storm water code document are demanding.

“You can dig a swale on your property to pool rainwater and let it soak into the soil rather than running into the street or sewer,” Andri said. “But it will take up quite a bit of space in your yard and has to be equipped with an overflow pipe. There are also tanks of several hundred gallons that capture water that can then be used for irrigation. The local RainWise program is subsidizing this for certain neighborhoods and quite a few have been installed.”

As it turned out, Veena and Andri had already incorporated a sizable rainwater-harvesting system that more than met the requirements of storm water run off regulations.

“So by lucky coincidence we saved perhaps $10,000 for extra storm water mitigation system because we already have our own system collecting all the rainwater from the roof, storing and purifying it as the home’s primary water source,” Andri said. “Maybe 80 percent of all the water we use over the course of a year is produced on our own property.”

The awards and savings have confirmed Veena and Andri’s efforts. The best reward, however, is that their children are not only safer but on a path they have helped pioneer for the benefit of generations. 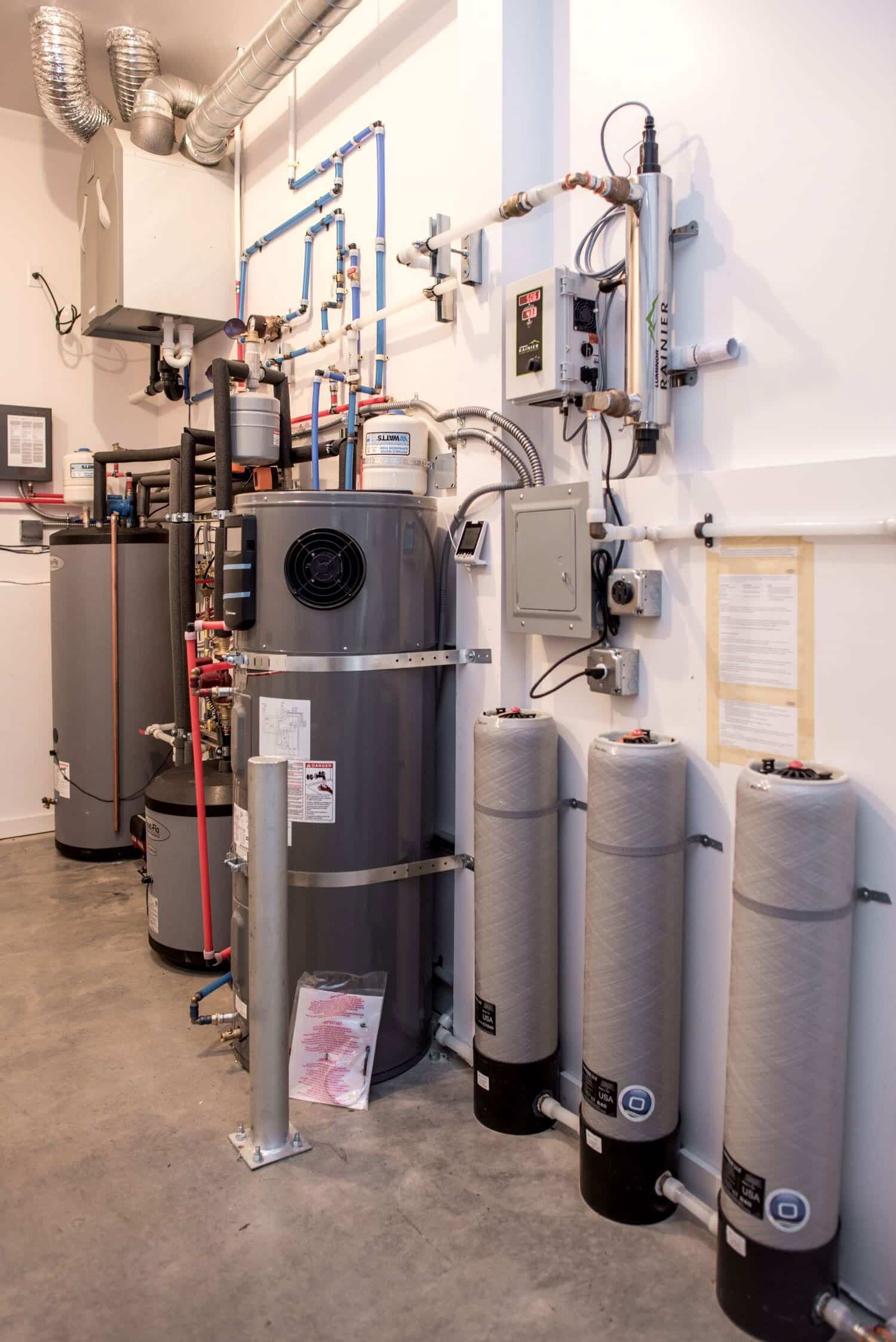 The house mechanicals in the basement

The following highlights of the home’s key features comes from the complete list available on the Built Green website.
Site and Water – The obvious features of low-flow faucets and toilets were just the beginning. A system to capture, store and filter up to 10,000 gallons of rainwater was enough to result in more than 80 percent reduction in water use.
Energy Efficiency – Achieved a Home Energy Rating System (HERS) score of zero! Solar PV, walls of 6-inch graphite SIP and a roof of 10-inch graphite SIPs. The foundation is R-23 ICF stem walls, R-20 rigid foam under slab; windows are triple-pane, wood-framed (no PVC, vinyl or aluminum). HVAC is a Chiltrix air-to-water heat pump w/ 4.5 COP for in-floor radiant hydronic heat on ground floor and ceiling-mounted air distribution heads on second and third floors; the hot water uses the Chiltrix air-to-water heat pump with tank storage. All lighting is LED and all appliances are ENERGY STAR-rated. The solar PV system is rated at 9.9 kW and two charging stations for electric vehicles are available.
Health and Indoor Air Quality – All paints, finishes, adhesives and sealants are low- and no-VOC; PVC alternatives used throughout home; fully insulated garage air-sealed from house with automatic exhaust fan; no added urea formaldehyde wood products; no combustion appliances in house; fresh air supply to all bedrooms