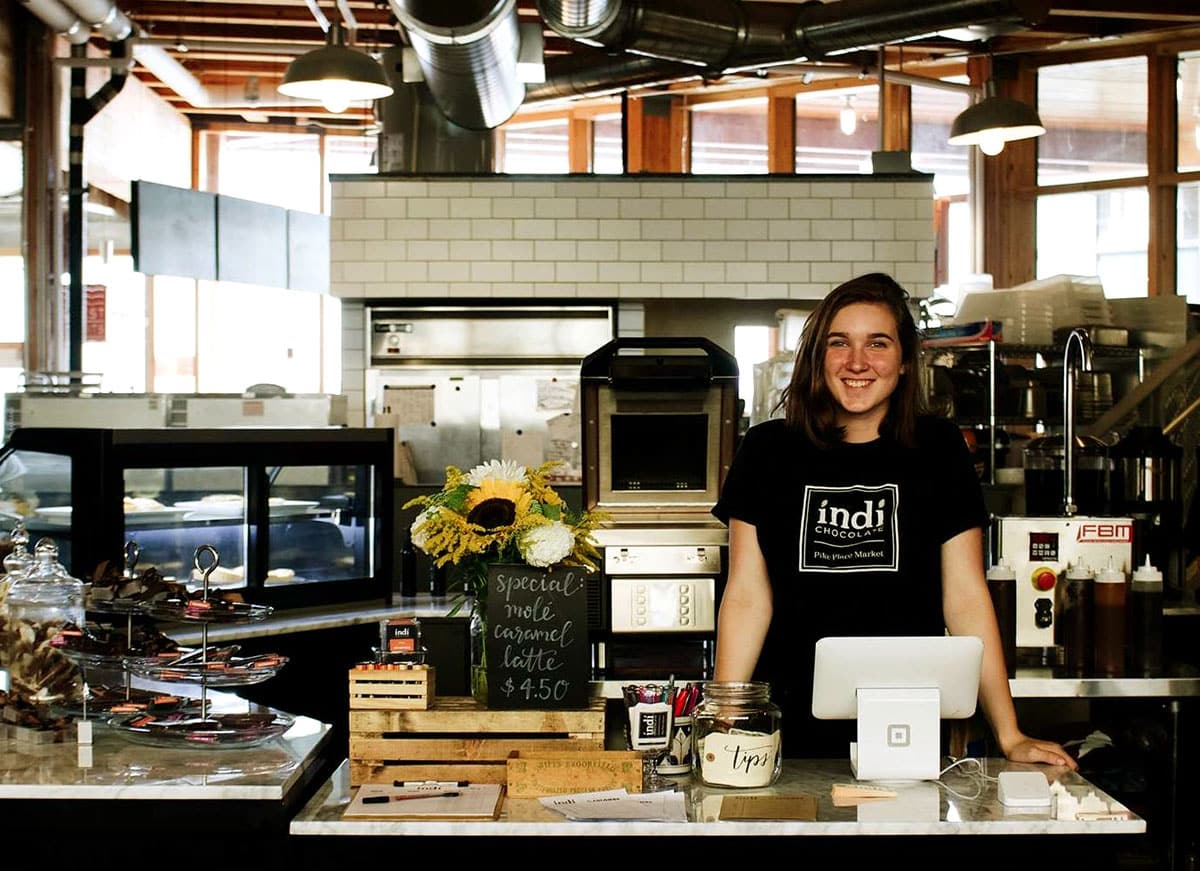 Erin Andrews’ indi chocolate is in a class by itself.

It’s no surprise that one ingredient in the success of Seattle’s indi chocolate has been the classes taught by founder Erin Andrews and her team. Spend any time chatting with her and you quickly feel the energy of someone who loves to learn new things and share what she knows with others.

That inquisitive, inclusive nature also helps explain the incredible variety of both products and activities she has packed into the factory-and-retail location she opened in the Pike Place Market in July 2017. 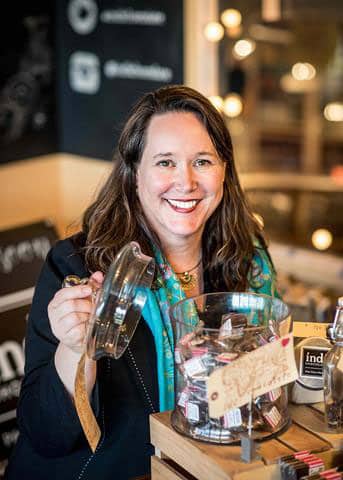 indi makes a vast array of edibles and "imbibables" from the small-batch, single-origin dark chocolate it creates onsite and in full view. indi only uses high-quality cacao beans from growers. The cacao is also used to make indi teas, spice rubs, and other products, while cocoa butter goes into a full line of indi body care products.

"We do everything from chocolates and chocolate bars to St. Patrick’s Day Truffles with stout and hops from our neighbors at Old Stove Brewery," Andrews told Seattle Arts & Architecture recently. "I’m probably one of the most diversified chocolate makers ever, with the wide variety of cacao-based products we make."

It is certainly one of the most diversified chocolate shops ever, with a café serving specialty coffee drinks that can be enjoyed on the rooftop patio with views of Puget Sound, and all the many special events and classes, including how to make chocolate making, truffles, liquor-infused treats, and more.

To make sure her facility would realize the full extent of her vision, Andrews did what she always does: She educated herself.

"After a lot of research and development and thinking about it, I pretty much did all the design work," she said. "I knew I wanted people to be able to walk around and see through glass doors and walls into our factory and roastery to experience the whole process from roasting the beans to the finished chocolate. I also wanted a café with a 360-degree design and a gathering space for classes and use for their purposes." 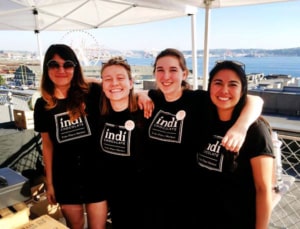 She hired architects to draw it up and get it approved, but there were times when her architects and vendors thought she was over-building.

"That was the funny thing," she laughed. "The architect and the builders thought I was crazy to say I needed 600 amps of power. They said I would never use it. I said, ‘I’m not building this for today. I know the machines and other things I’m going need down the road to grow.’"

Back in 1995, when indi Chocolate was part of the unforeseeable future, that thirst to explore and learn landed Andrews on the beaches of Belize. While on a volunteer fact-finding and restoration effort to protect the country’s endangered coral reefs, she fell in love with the country and people. In February 2008, when her sister was organizing a family trip to Belize,she wanted to make it "more than just a week with family." 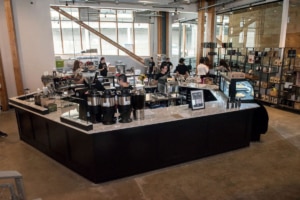 "My kids had been asking me where chocolate comes from and I thought I’ll teach the kids how chocolate grows on trees," she recalled, revealing that her then-5- and 7-year-olds hadn’t fallen far from her tree. "I wound up doing a lot of research before I ever went down there."

The research included contacting cacao growers in Belize. Andrews was nearing the end of seven years as a stay-at-home mom after working as a CPA at Price Waterhouse Coopers where, "I actually did fairly large IT projects." She was ready for a new chapter and starting a business was something she was ready to invest time and money in. Having "loved chocolate forever anyway," while in Belize she approached some of the farmers she had met through her pre-trip research about forming a chocolate business in Belize.

They agreed, and by mid-2008 she and her partners launched a Belize-based chocolate company at the Toledo Cacao Festival.

"That’s where I really learned how to make chocolate," she said. "It also taught me about working with farmers directly, which I realized was something I absolutely needed to do, because it would really have a positive impact on their quality of life."

Over the next two years, while overseeing the business from Seattle, she discovered a dark secret about skin care products.

"My younger daughter, Siena, had a reaction to the body care lotion she was using," Andrews said. "That prompted me to learn more and I was appalled at what was used in these products – even expensive ones labeled ‘natural.’"

As a result, she launched her Seattle-based company. It was Siena who came up with the idea to name the company after her older sister.

"I started indi chocolate with the body care because that was something I could start making at home for a relatively low initial investment," Andrews said. "The sale of the cocoa butter-based body care products allowed me to purchase the initial equipment to make chocolate for indi chocolate."

"The rule for Pike Place Market, however, was that the store had to be my first and only business," she explained. "So I ended up selling my interest in the Belize business to one of the partners."

She would maintain those enduring personal relationships with the Belize farmers who taught her so much, and build new relationships with the manufactures of the machinery in her factory and the tabletop chocolate makers she sells to customers. indi chocolate was born, and named after her older daughter. The skin care products were now also branded under the indi name.

"Siena absolutely loves being a part of the indi team, working the bar as barista and helping out in the factory," Andrews said. "Ironically, the Indi of indi wants to be a preschool teacher and her high school schedule already allows her to teach and go to school."

Actually, one teacher and one chocolate maker sounds like things are right on course.

DEFINING THE HOME OF THE FUTURE