When 14-year-old Ellsworth Storey walked onto the grounds of the 1893 Columbia Exposition in his native Chicago, it was to see the future of urban development and architectural innovation.

Instead, he saw his own future.

The Exposition’s stately white buildings so impressed young Storey that he decided to become an architect. A few years later, while attending the University of Illinois, he toured Europe and the Middle East with his family and was inspired further.

In 1903, he graduated, married and moved to Seattle. He built two homes in the Denny Blaine neighborhood overlooking Lake Washington, one for his parents, and another for himself, wife Phoebe and daughters Eunice and Priscilla, who followed shortly after. 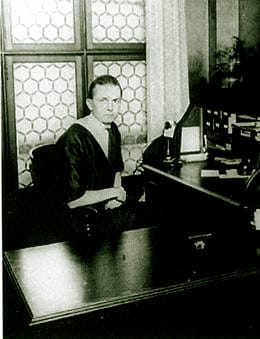 Storey would create buildings large and small, public and private, and in the process define what became known as “regionalism” or “the Northwest style.” Among the signature features of his work are extensive use of local materials, distinctive window treatments, multiple rooflines, projecting eaves, dark-stained exteriors, and the incorporation of elements from the Arts and Crafts concepts developed by fellow-Chicagoan Frank Lloyd Wright. One can clearly see echoes of Swiss building concepts he witnessed on that trip to Europe.

He died in 1960, but not before making a lasting impression on his granddaughter, Alice Speers, one of Priscilla’s three children.

“My own memories of our grandfather include his love for word play, his fondness for using some French phrases, and his constant tending and tinkering with fire – mostly in the fireplace,” Speers said recently.

A mother of two and former admissions officer for Lewis & Clark Law School, Speers fondly recalled a favorite memory of her mother’s.

“She told me about going with her father to the backyard with their easels and drawing materials,” she said. “The view overlooks Lake Washington and Mt. Rainier. She remembered her father helping her learn about perspective on that occasion.

“He was sometimes more interested in the architectural look of a space than in practicality,” Speers continued. “In his own home he did not design a closet in the master bedroom, and my grandmother Phoebe had to insist that he include space for their clothing!”

Between 1913 and 1916, Storey built a number of cottages on Colman Park in Mt. Baker now owned and managed by Speers and her older sister Kathleen, a retired psychiatric nurse, and her brother David, an electronics engineer.

“In 2014, the family collaborated with Historic Seattle to hold a centennial celebration of the Ellsworth Storey Cottages,” she said. “My siblings and I continue to own and manage these small homes as long-term rentals. Most tenants have occupied their cottages for many years and are permitted to alter the interiors with permission, but because the cottages are on the Historic Register, the exteriors cannot be altered.”

In Editor Jeffrey Karl Ochsner’s Shaping Seattle Architecture: A Historical Guide to the Architects (1994), Grant Hildebrand writes that “the cottages, together with the Evans house and the two Storey houses, have been most influential for later designers, perhaps because, in their fresh underivative forms and their thoughtfully imaginative use of simple local materials, they have been seen as Storey’s most original interpretations of the nature of building in the Puget Sound region.”

Speers made her own contribution to the Northwest, chairing the Environmental Commission of the Episcopal Church in western Oregon for 15 years. Currently her focus is on her garden, the family’s cottage industry, and her grandfather’s legacy.