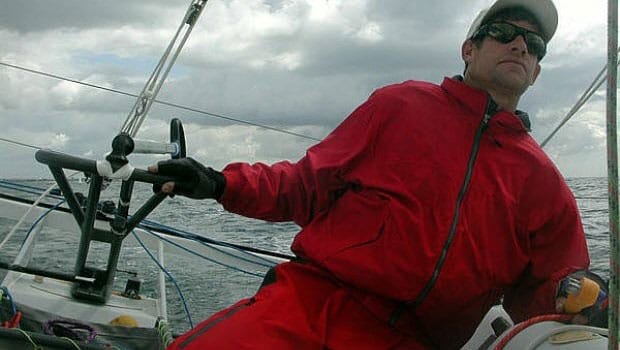 Can a professional sailor apply the discipline and high standards required to win a gold medal to building homes in Seattle? And do it in line with his life-long interest in environmental protection? Seattle native Jonathan McKee has.

Before becoming a green builder, the 56-year-old sailor medaled in both of the Olympics Games in which he competed: winning the Gold in the Flying Dutchman class in L.A. in 1984 and, with his younger brother Charles, the Bronze in the 49er Class at the 2000 Games in Sydney.

“I’m primarily a professional sailor, and still do a lot of racing around the world,” McKee told Seattle Arts & Architecture. “But I’ve also been interested in building since I was a kid and have a Bachelor’s in Architecture from Yale University.” He is currently coaching one of the seven two-person U.S. sailing teams that will compete in Rio.

“In the 2000s I was doing a lot of professional sailing,” said McKee, whose father was a professor of Geological Sciences at the University of Washington and whose mother taught sailing and later sold residential real estate. “I did a couple of America’s Cup campaigns and lived in New Zealand and then Spain. Then my wife and kids and I moved back to Seattle in 2008.”

He wanted to start a business that would “exercise another part of my brain.” Being civic-minded, and having always enjoyed building and renovating, he looked into green building as a way to improve the city’s built environment. This was just as things were in a downward trajectory, and housing was going through “a pretty big market correction.”

“A lot of builders were basically bankrupt or in trouble,” he said. “It was a much different time than it is today. That was when I started my business and the concept was to try and add density to the parts of the city that would benefit from it and support it. Getting people out of the suburbs and into the central parts of the city sounds very mainstream now, but back then it wasn’t really as widely accepted as being a positive thing.”

With the help of an experienced real estate agent he found his first site in Capitol Hill, on 19th Avenue just off Madison. It was the perfect area, with a lot of cultural vibrancy where people were already enjoying a great lifestyle, and where they could get by without a car.

“Finding a location where you didn’t necessarily need a car was also in the back of my mind,” he said. “The structure on the property was a little turn-of-the-century cottage that had basically become a crack house. But it had a big back yard and was commercially zoned.”

With architect David Nieman he fixed up the house and subdivided the rest of the lot for three townhomes of 1,400 to 1,700 square feet each. The location was not required to have parking.

“It went really well and was financially successful,” he recalled. “It was a good introduction for me. I learned how the game is played and the rest of my projects have followed off that.”

Eyes on the horizon

McKee’s construction is designed to earn the accreditation of Seattle’s Build Green program. That first project was built with numerous features that would earn the high Five Star rating.

“My focus is on creating a better envelope that uses less energy,” he said. “I try to take a long-term perspective. I look all at the buildings that have been around for 100 years or so and try to think about what my building is going to be like in 100 years. Will it still be here? How will it function?”

So, to give each home its best shot for sustained value he uses triple glazing, which provides a big increase in energy performance at a moderate cost. He aims for insulation efficiency beyond what the building code requires while improving indoor air quality, taking advantage of natural light, maximizing water conservation and making use of reclaimed and recycled materials. He also pre-wires for solar so that the eventual owner can take advantage of available Washington incentives that include tax credits and selling power back to the utility.

“It’s not clear that there’s an economic payback for the builder,” he admitted. “There may be: It’s pretty hard to measure. I just do it in a way that’s consistent with my values.”

McKee continues to put a higher value on green, which just might help him create the gold standard for home building.