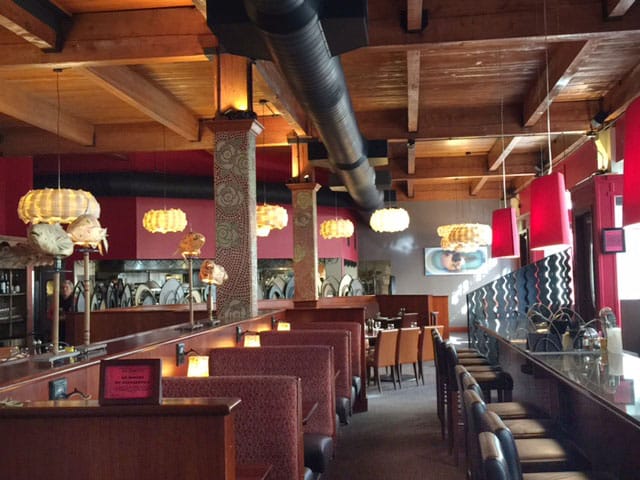 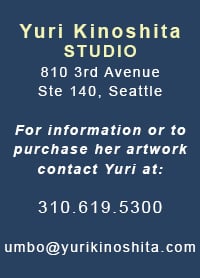 One fall on a walk through Seattle with a friend, “Woven Light” artist Yuri Kinoshita paused to appreciate the beautiful Dahlia Lounge.

With a magical kind of synchronicity, Yuri was contacted a few days later and asked if she would redesign its lighting. By that November, her brilliant works of art were part of the restaurant’s rich ambiance.

This came only months after Kinoshita was responsible for a full moon over Seattle’s river. In August 2015, a special light-creation rose 100 feet in the air on a crane. From it, aerialist Tanya Brno was suspended in an exciting free public event that included a concert of voices. It was a wonderful introduction to an artist who had fallen in love with the city only a decade before.

It was while she was in California for one of her shows that the Kyoto-born Kinoshita made the first of several trips to Seattle to visit friends.

“I fell in love with the city,” she recalls: “Especially the amazing view from Kerry Park on Queen Anne Hill showing the contrast of the city and nature.”

It wasn’t just landscape that caught her eye. Kinoshita is a different kind of artist. Other visual art is appreciated because light bounces off it: Kinoshita’s art is the light itself.

“I fell in love, primarily, with Seattle’s sublime, peculiar type of light, which deeply influences my work,” says Kinoshita, who decided to move here during a solo show at KOBO at Higo. She obtained an artist visa and within a year had a studio in the Georgetown neighborhood.

“Shining through the large windows of my studio,” she says, “a divine light seemed to glow between the clouds and I was showered with childhood memories of the translucent white light filtering through shoji screens at the edge of our garden.” 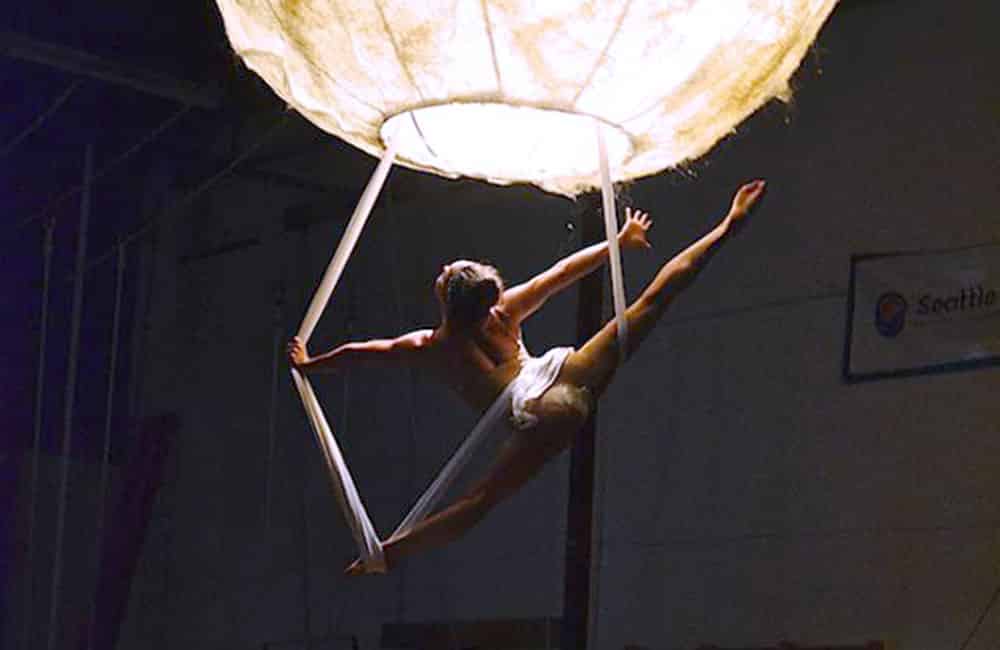 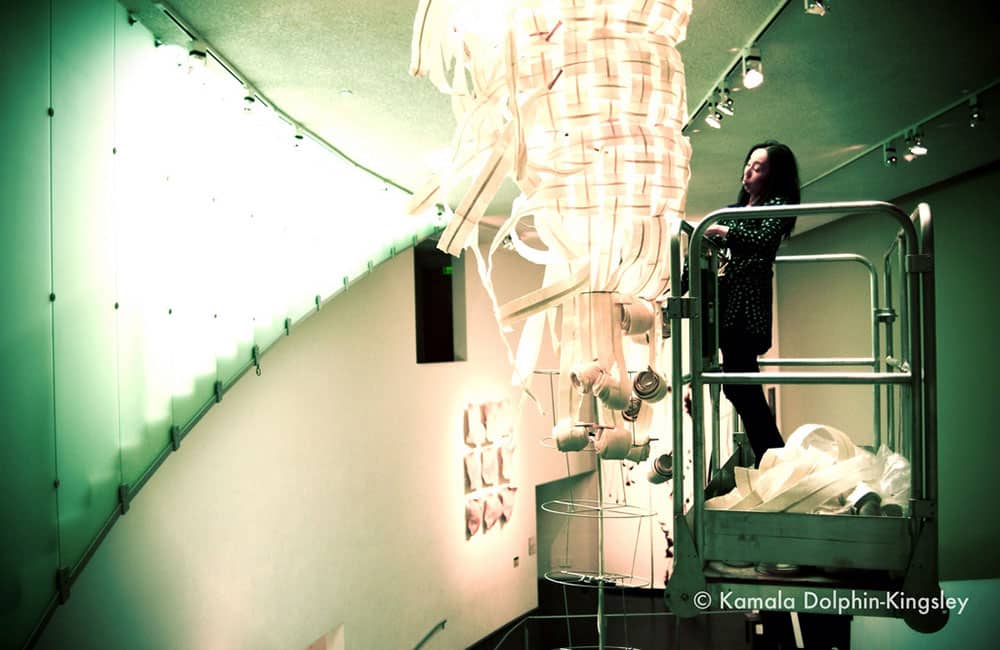 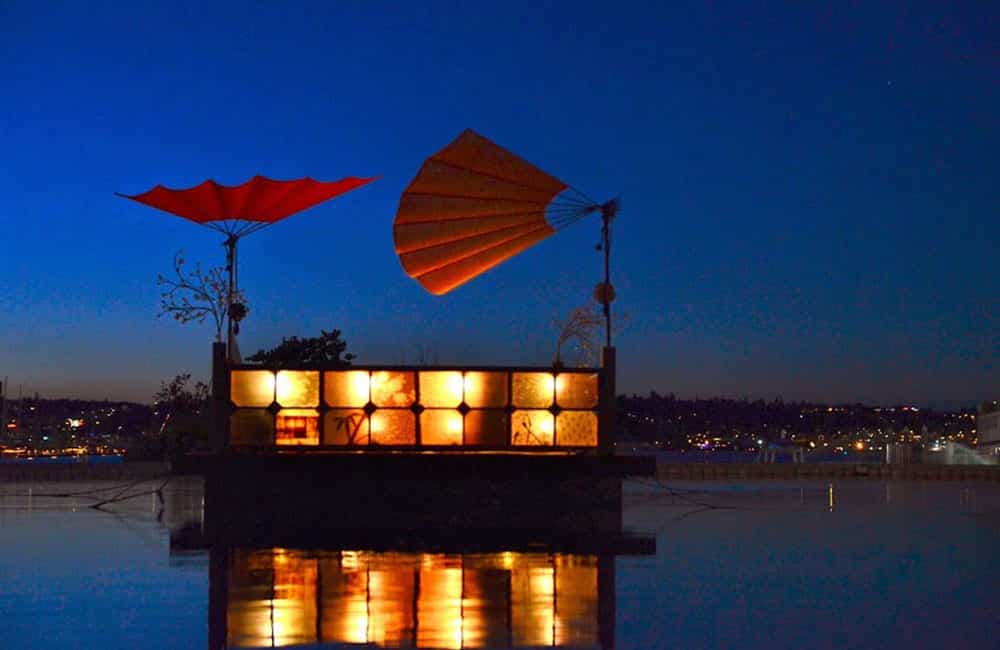 Born into a family of kimono makers, she was fascinated by “the richly patterned textiles that surrounded me, especially the way they depicted natural beauty in their backgrounds. The beautiful colors of the sky and the way they represented light had a visceral effect on me.”

Her career has been as brilliant, varied and colorful as that fabric. In 1993, she graduated from Osaka Mode Gakuen Fashion Institute, majoring in interior design and earning the school’s grand prize for her graduate project. The prize included a trip to Europe, Asia, and the U.S., after which she joined Kinoshita Co. and created the Umbo division. Umbo, now based in the U.S. as well as Kyoto, specializes in art objects for home design and unique kimonos made from fabrics she has found in countries around the world.

The commissioned “Woven Lights” designs she has created since moving to Seattle have been shown at the Seattle Art Museum and Bellevue Art Museum, and brighten the local restaurants Momiji on Capital Hill, Moksha in Bellevue, Girin on Pioneer Square, and now Dahlia Lounge (top, and below). 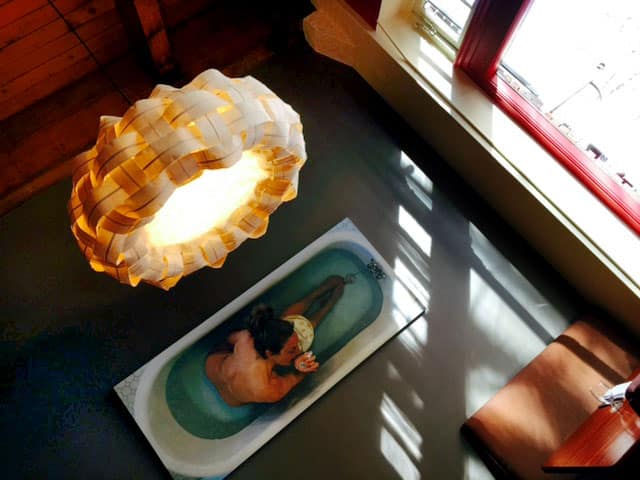 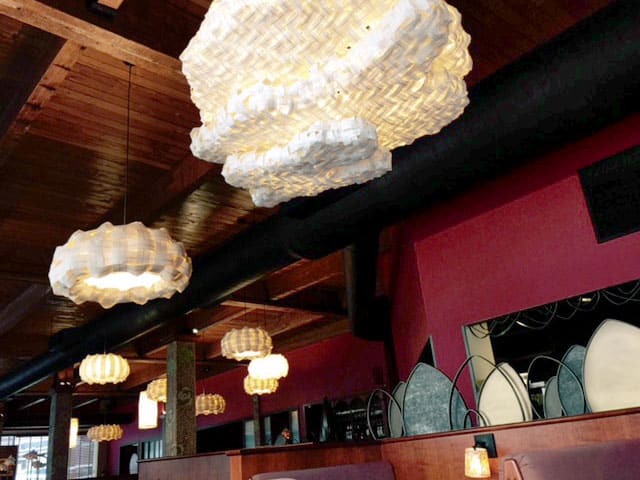 “For Momji, I was inspired by two carp swimming gracefully in a pond in Kyoto, and used Kinran textile from Kyoto incorporated with gold paper,” she explains. “For Moksha, the owner wanted his Indian restaurant to have an elephant, so I created a flying elephant with cape and cap from embroidered organdy for bar area.”

In October 2015, her Mugen (Infinity) show was held at Seattle’s Pottery Northwest. The exhibition included a tea ceremony. See a video about the Mugen show.

To learn more about Yuri and future exhibitions, visit the Yuri Kinoshita website.