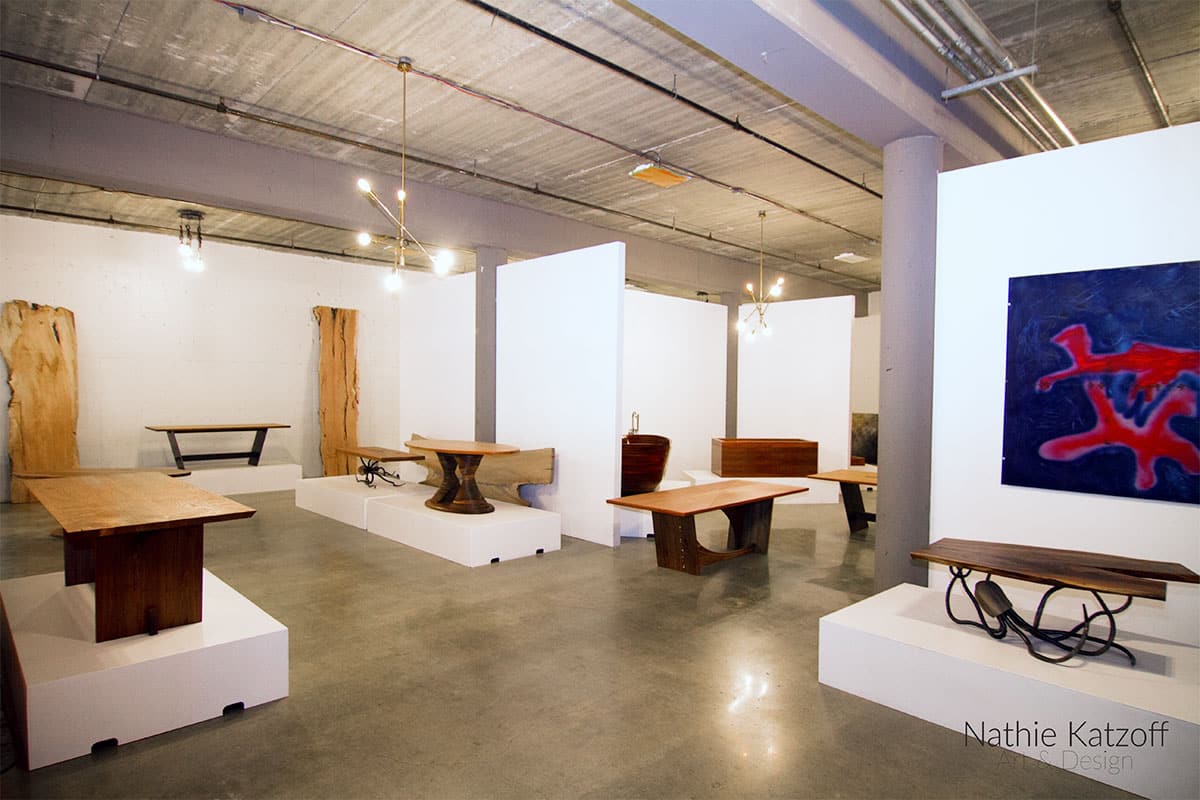 NK Woodworking & Design describes the domestic and exotic hardwoods used in its fine-art furnishings and fantastic stairways as “distinctive and sustainable.” That’s also a good description for the work produced and, in this year of lives and businesses uprooted by global pandemic, the company itself.

In 2020, the nine-year-old firm not only held fast to its principles and profitability, it was also finally able to purchase its own workshop and creative space. The former winery import building on the main road into West Seattle is a 27,000-square-foot multi-story facility that boosts NK’s workspace by more than a third. It includes the design offices, the NK workshop where everything is handcrafted, and an impressive 7,000-square-foot gallery. Nathie Katzoff (right), NK Woodworking’s founder, owner and creative North Star, has “been wanting to do this for the last five years.”

“The idea was to create an exclusive, appointment-only gallery space integrated with the workshop where we could display our artwork in a way that’s a little bit museum-esque,” said Katzoff, whom Seattle Arts & Architecture first profiled in 2016.

“People from around the country and all over the world flew in to see the previous workshop and studio space,” he said. “Now the designers, architects, home builders and even homeowners who are serious about purchasing a piece of furniture or commissioning a large-scale stairway can see these pieces in person. That’s invaluable.”

The gallery’s mix of about 40 one-off pieces and pieces from furniture lines NK Woodworking is now designing under the brand of Nathie Katzoff Art & Design, are available for purchase. The collection includes dining and office tables, coffee tables and benches, sculptures and wall art as well as extraordinary hardwood tubs, sinks and vanities.

“It’s also a pool of inspiration,” he added. “As an artist and designer it’s really nice when people say, ‘I really like this piece you made. I’d like something in this vein,’ instead of, ‘Here’s a bunch of things I’ve found on the Internet by other artists – maybe there’s some mix between your art and theirs.’

“I don’t want to make someone else’s thing,” he said.

It will also provide Katzoff and his team of 20 or so craft workers with the opportunity to educate the public.

“There’s a lot of learning that has to go into people understanding what they’re buying,” he said. “A lot of times people know very little about the woods, glass or metals that go into a piece. And being able to see the piece they would be getting is very powerful. They say ‘I really love this’ and what they’re looking at actually is what they will get.” 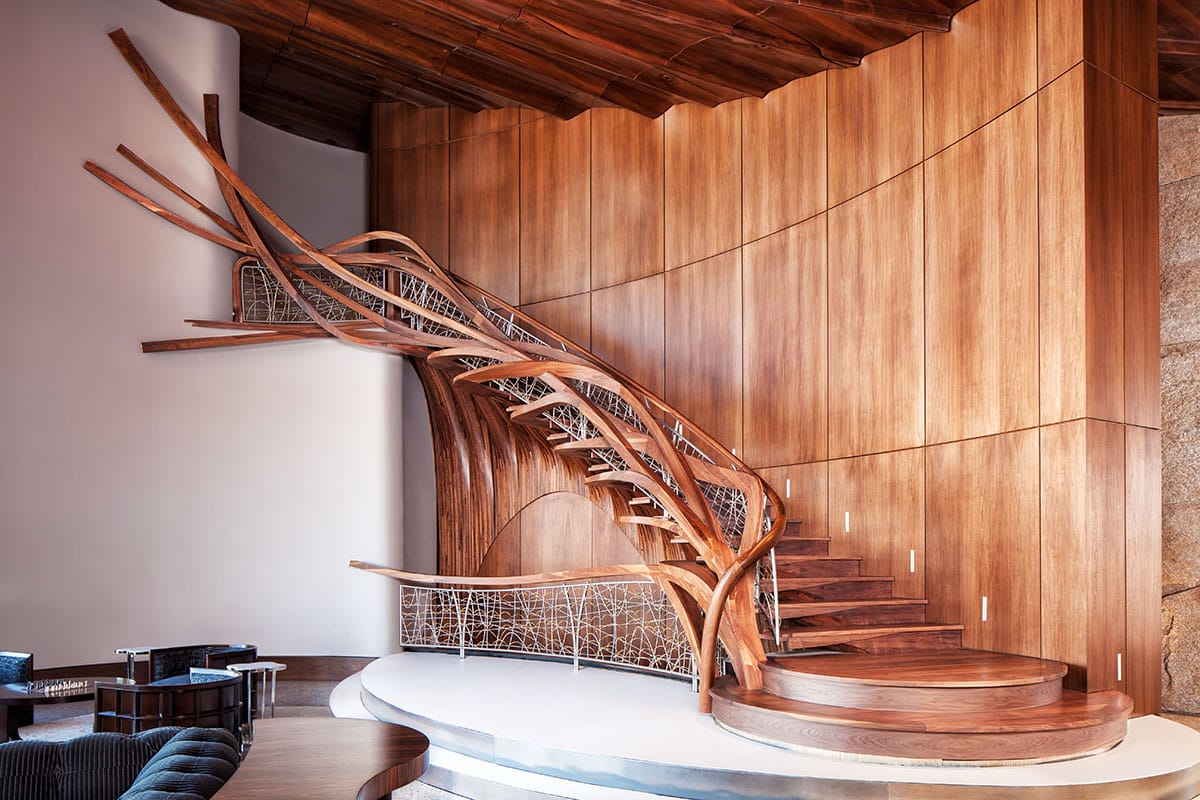 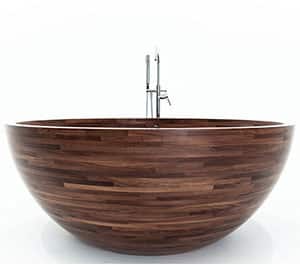 It was 2013 when the upstart company began earning a national reputation for distinctive creations, bursting onto the annual honor rolls of the Stairbuilders and Manufacturers Association. Since then its worldwide renown has spread for an array of imaginative furnishings led by magnificent staircases that are as much flights of fantasy as flights of steps.

“A lot of people who want this level of work continue to want it despite the pandemic,” Katzoff said of business in 2020. “And in some ways they want their homes and spaces to be even cooler now. They are especially interested in the freestanding pieces like a new table or bath or art work they can place in their house that aren’t part of a remodel.” 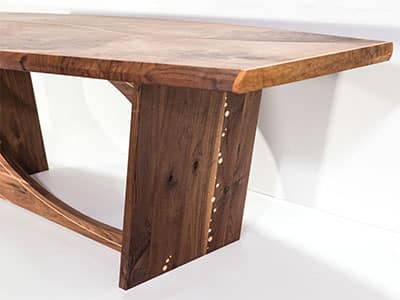 Those who are invited to visit the gallery and peek into the workshop will likely be able to see a staircase, which take an average 11 months to build, under construction, depending on how technical or fantastical the design. More simple designs can be created in less time.

One example, “Elemental Spine Stair” (above), was a two-year project integrated into construction of a 60,000-square-foot residence in the Midwest. A clump of graceful wood stalks grow from the edge of the first step to bend up the balustrade of wire-metal jewelry panels as if blown by wind. The longest tendrils attach to the upstairs wall before a beautiful two-story panel wall. Below, a matching lower balustrade guards a descending stairwell to the lower floor where “a bronze Shakespeare head has a push-button that opens a hidden, hydro-mechanical, Batman-style door.”

“Building it was so exciting – just the jig and the scale of it,” Katzoff said with characteristic zeal. “It’s hard to see in the photos, but it’s pretty huge. It’s looming up about 30 feet. 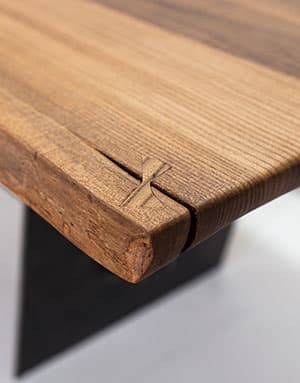 “It started off with ‘Let’s see something cool and crazy and flowing,’ and that was in collaboration with the architect,” he added, describing a process that included a lot of back and forth with hand sketches before a full 3D model with samples was presented. “That one was very styled before we went forward. On the bigger custom ones, they often say, ‘Just go for it. Here’s a bit of an idea of what I’m interested in, but I’m more interested in you making whatever you think you could do that would be the coolest.’ Those, where the clients empower that attitude, are my favorite projects.”

Many projects like this one are for wealthier clients with homes that are “spaces for work, hosting mini-conferences and fundraising parties, and other events.” At a Super Bowl party hosted by the owner of this home, one guest was so gobsmacked that he called Katzoff during the party.

“Hey man,” the partygoer shouted. “This is just craaazy!”

“I was like, ‘Who is this?'” Katzoff laughed. “It was Steven Tyler of Aerosmith.”

Another recent job that is “a banyan tree-inspired design.”

“It runs through this house,” Katzoff said, as if describing something growing of its own accord like Jack’s Beanstalk. “It just turns into all these different pieces that are part of the same flowing sculpture, so it’s like a sculptural stair that follows up the wall and turns into this ceiling medallion sculpture. Then it busts through a wall and turns into a pool table and then busts through another wall and is a bar. Then it turns into these branches that turn into another sculptural element and then a stair.”

That one, which was shipped to the East Coast in early November, has inspired a spin-off project “that is a really radical, awesome wild sculptural – based around a stair that is this really crazy sculpture basically that has all sorts of art glass and bronze and woods all mixed together in this big swirl.”

Though it feeds on unrestricted imagination, Katzoff said NK Woodworking strictly adheres to its promised deadlines.

“Early on we unfortunately underestimated a lot of what we would take on,” he said. “Now it’s really the opposite. We are almost always ahead of schedule and often we require our clients to pay to store our pieces near the site because 90 percent of their construction projects end up taking longer.

“That really is the best thing for everyone,” he continued. “Because we can’t rush these pieces and so we want to stick with the schedule we’ve agreed to. It is better to build something crazy and then store it for a little bit and then install it when the contractor is ready we put it in, instead of putting it in at the wrong time in their sequence.”

Now Katzoff is launching a grand new experiment with the Nathie Katzoff Art & Design Gallery. He thinks “it will be a cool space to host events for the region’s design and art communities,” when the time is right. For now, however, the mixers will have to be virtual. For the individuals who visit, masked and social distanced, the effect promises to be magical.

“In this configuration, instead of having a few pieces to view, visitors will be surrounded by this vision,” Katzoff said.

Seattle designer Allison Scott, who recently visited the gallery, said that, “Seeing all the pieces together in one place is like walking among giants. It’s powerful … and pretty exciting.”